Pentecost Camp 2012 in Naunhof near Leipzig

On Friday May 25th 2012 the students and trainers from the Dojo TSGK Königslutter and Braunschweig/Rautheim started to our Pentecost Camp this year. In order to arrive on time, most of them had left work early or had even taken an extra day off. So everyone arrived one after the other at about 5 pm, except a few who were on their way on the A9 towards Munich. The joy was great when we saw many "old and new" sports friends from all over Germany again. 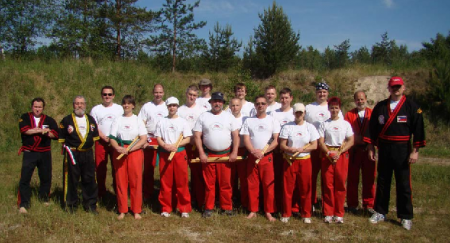 After the room distribution we went to the dinner all together. Afterwards our grandmaster Wolfgang Schnur talked about the course of the camp and the individual training sessions. When he announced who should take an exam the next day, some became very restless. You could see the panic in their eyes. From now on our trainers were very popular. The biggest part used also the offer to go through the examination program again in the evening, except ... a few from Braunschweig ..., which wanted to prevent the "Lagerkoller" and made themselves comfortable at the Grillensee. But exactly these from Braunschweig had already prepared themselves in advance for the examination with additional training units.

At the end of the first day we met in front of the building for a small but somewhat longer drink. It was astonishing that some of them returned to their childhood with some medicine in their blood. Snap lights, soap bubbles and water pistols were as much in demand as long, long years ago!

Meanwhile, at an advanced hour, all comrades said goodbye to their well-deserved bed rest, after all tomorrow was exam day.

Except in Room 406, there was still light burning!

Tired but strengthened by the breakfast we started the first two training sessions on a sunny Saturday morning. Grand Master Wolfgang Schnur handed out small presents at the beginning, to the joy of all participants. After a relaxed warm-up phase, the participants again trained specifically for the respective examination program. Every examinee had the possibility to get the final touch for the exam in the afternoon.

The time passed quickly and it was lunch break. After lunch, some went to the nearby Grillensee for a swim, others (most of the room 406) took the opportunity to catch up on lost sleep.

The third training session followed and Roland started with the acceptance of the test. Those who had it behind them took a break, those who still had to wait continued to practice their program. At the end of the second day the last two units followed. Roland taught us first in the middle stick posture, before Ralf showed us different Abanico styles.

Then we had to take a line up and every examinee got his certificate. All had passed! Furthermore Ralf Notter received the 4th DAN Mano Mano and Bruno Hendris the 2nd DAN after their passed exam from Grandmaster Wolfgang Schnur.
Torsten Kosuch received the trainer license of the 1st German knife professional association. 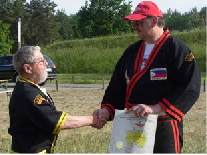 Grandmaster Wolfgang Schnur paid tribute to Roland Herlt for his decades of voluntary work, his work as a trainer and instructor, as well as for his support and helpfulness in the MAMD. To all honour he was awarded the 6th Dan Modern Arnis and Mano Mano.

Torsten Zumpf was also highly praised for his efforts in organizing the Pentecost Camp.

In the evening Sven from the Dojo Penzberg had a delicious barbecue and we sat together for many hours before the tiredness of the exhausting training day began and most of us retired to sleep.

Only in Room 406 was still lit by light.

Under the motto who can celebrate his passed exam, can also train, it continued on Sunday. The sun was again on our side and burned hot from the sky, so that the shadow places under the tent were very much desired. But somehow we all fit under it this time. That had also its reason, grandmaster Wolfgang Schnur took over personally the first training unit and everyone wanted to be as close as possible with his demonstrations. We learned to transfer the implementation of the double-stick techniques to the weaponless part Mano Mano.

With the lunch break the sun disappeared behind the clouds. That was a good thing, because now we needed a lot of space for the knife session. Torsten showed us block techniques against free cuts and stabs. After a short break we continued with the 1st knife form. First with big question marks at the barn wall and then into the practical application. At the latest now the question marks dissolved and suddenly the movements at the barn wall made sense.

The last part for this training day was taken over by Roland and Ralf. We exchanged the knife for a Bo (long stick). Starting with the basic strokes, blocks and vertebrae, via Sinawali with Bo/Bo and Bo/stick we came to the first disarming techniques, which were a bit more difficult for us due to the length of the Bo. Funny, why did disarming always work for our trainers? Our assumption, it can only be because of the meanwhile long training day :-)) .

After dinner together we gathered in the lounge, where we exchanged our experiences and feelings from the training day in a convivial atmosphere. After three days of hard training the first signs of fatigue became visible relatively early. Together we decided to finish the day and went into the night's rest.

Except in Room 406, there was still light burning!

As remaining program of the now last and again sunny camp day still two hours Hanbo/Bo stood on the agenda. Torsten Kosuch taught us a Hanbo-Anyo and with so some made themselves visible at the latest now due to lack of sleep, sun exposure, ... concentration gaps. Around noon Grand Master Wolfgang Schnur finished the Pentecost Camp 2012. Before all started their journey home, we had lunch together and said goodbye to each other extensively.

It was an excellently organized course that brought with it sporting challenges, many new insights, success and a lot of fun. A big thank you to Grandmaster Wolfgang Schnur for the management, to the Dojo Fudoshin for the organisation, as well as to the coaches, who were always available for questions and tips and to all students.

All together they contributed to the fact that one will think back gladly to the time in Leipzig!!

You can find more pictures of the camp in our gallery.
Back to reports
Text
Frank Gorgiel, Frank Stallmach
Photo
Sebastian Pfeiffer, Torsten Kosuch, Roland Herlt